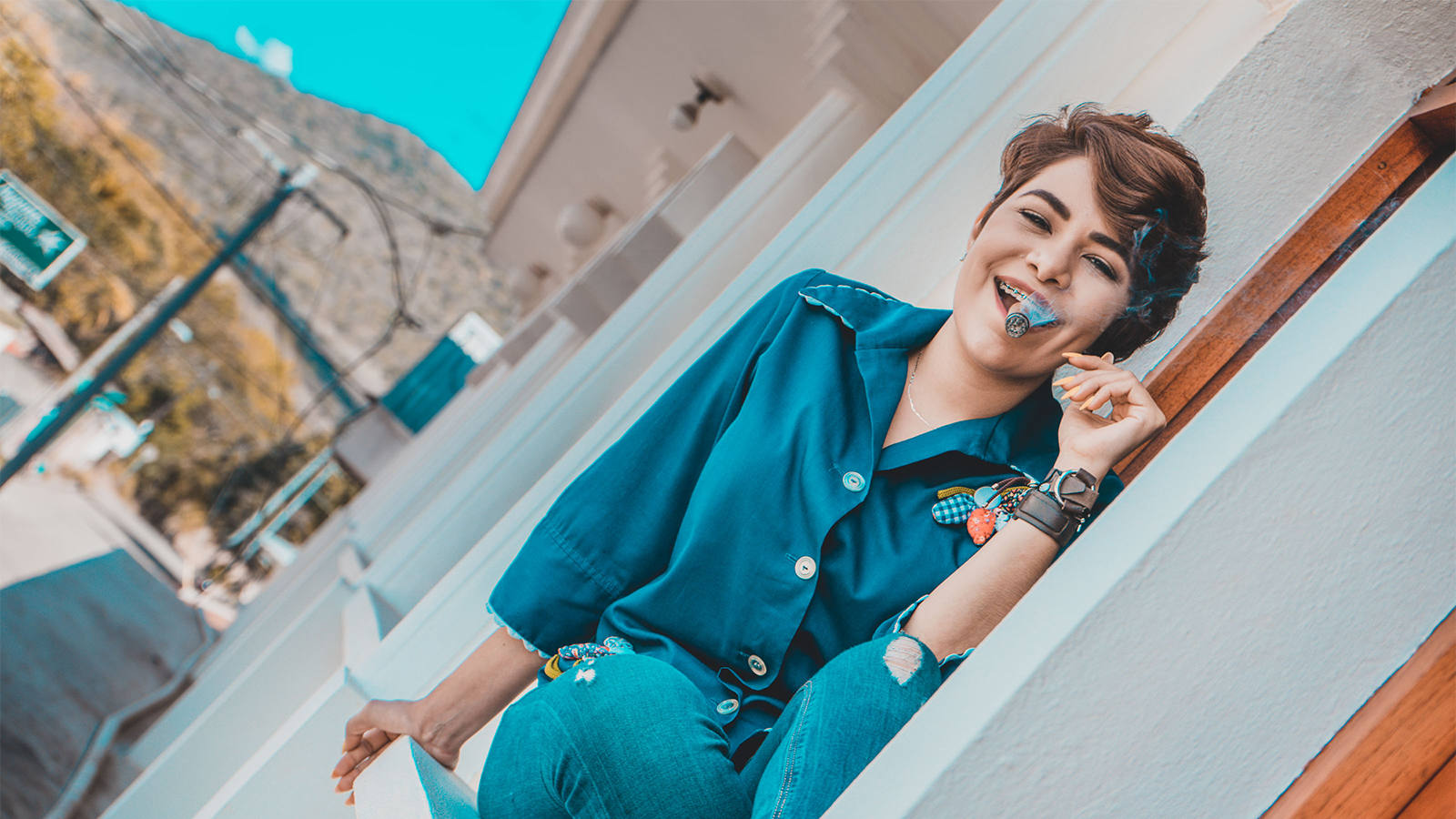 Indiana Ortez is a young Nicaraguan cigarmaker with a passion for social media marketing (you may recognize her Instagram handle, . At just 25 years old, Ortez has already created a limited-edition, premium  blended in collaboration with her father, Omar Ortez, and California-based cigar company She also serves as quality control manager and chief marketing officer at Agroindustrial Nicaraguense de Tabacos S.A. (Agrotabacos), her father’s cigar factory in Condega, Nicaragua.

Ortez recently spoke with Cigar Aficionado assistant editor David Clough about her family’s history in the cigar industry, her experience working with premium tobacco and her plans for the future.

CIGAR AFICIONADO: When did you smoke your first cigar?
ORTEZ: At the age of 17, I smoked my first  I recall feeling like it was very strong, with rather unpleasant flavors. I had never even tried to smoke a cigarette. I had a lot to learn.

Q: How did you get started in the cigar industry?
A: I approached my father asking him to teach me. My father [Omar Ortez] has been in the cigar industry for over 30 years. There was an alluring quality to the business that drew my interest and held it. I discovered that in the tobacco world, specifically in production, one is artistically free.

Q: What did he say?
A: He took my request quite seriously. The very next day he introduced me to Fausto, the person who would be my personal teacher for the coming six months.

Q: How old were you when you started working at your family’s cigar factory?
A: When Fausto started training me I was 22 years old.

Q: What did he teach you?
A: I had to learn the whole process of producing a cigar: the classification of raw materials, sorting leaves, bunching the filler leaves, wrapping in a binder leaf and rolling up to finish with the packaging. When I started bunching, I had to make 100 perfect, cylindrical bunches. Only when I managed to do so, would we move on to the next stage. At the end of the day my teacher Fausto would check in, quizzing me: “Tell me about the leaves? Where do they come from? What is their aroma and texture like?”

Q: Did you learn quickly?
A: It took me about a month-and-a-half, day after day from 6:30 a.m. until 5:30 p.m., without salary to produce my first 100 bunches that met their high quality expectations. I can assure you that when my dad would come over to supervise me, my levels of nervousness would drastically increase! My fellow bunchers luckily gave me some hints and tricks that helped me to reach the level of quality control that was expected of me.

Q: What was it like working as a tobacco buncher?
A: All of my co-workers treated me with such kindness and respect. They supported me and helped me to learn correctly. I was wholeheartedly welcomed into their work environment. In Nicaraguan factories there are almost no female “” so I was nicknamed “La Boncherona.”

Q: What did you learn next?
A: When I was finally allowed into the rolling stage, my task was to roll 100 perfect cigars out of the ones that I had bunched. In this part of the process there wasn’t any competitiveness between the women. Our female rolling experts would come to my table, sit down, and teach me how to roll a  They would voluntarily come over during their “free” time and point out my mistakes with the cutting. They would not leave until they saw I was handling the [cutting and rolling] correctly.

Q: Was your father there to guide you?
A: Each step in the process of producing a cigar was taught with discipline, and under the strict supervision of my father. Observing his ways to inspect and feel the tobacco, his method of blending, and his entire modus operandi was, and is, very special to me.

Q: Did your father teach you to blend tobacco?
A: Absolutely yes, this one-way ticket travel to the world of tobacco began three years ago, when I started to join my father at the factory. Being around him has allowed me to understand his tireless passion for tobacco, the same one I have known since I was a child, when he arrived home from work with his tobacco-smelling shirt.

Q: Did you grow up in Nicaragua?
A: Yes, I grew up and have lived in Nicaragua my whole life.

Q: Tell me about your family’s tobacco history in Nicaragua.
A: The Ortez family was introduced into the world of tobacco when my grandfather Ramon Ortez began to work on the tobacco farms [in Nicaragua] in 1967. My grandfather’s perseverance created the opportunity to learn the secrets of tobacco and set the path for future generations.

At the age of 10, my father, Omar Ortez, joined the fields to work with my grandfather. Many years later, with more experience and knowledge learned through his dedication, my father was promoted to head of the farm. He grew into becoming the general manager of companies that were instrumental in the development of Nicaragua’s tobacco industry.

Q: Did he branch out on his own?
A: In 1992, my father established his first company, Agropecuaria Exportadora S.A., which was dedicated to the production of raw materials supplying the manufacturers of cigars. This company existed until 2012.

Q: When did he open a cigar factory?
A: In 1995, Agroindustrial Nicaraguense de Tabacos S.A. (Agrotabacos) was born as a family business. Agrotabacos is dedicated entirely to the production of hand-crafted cigars from tobacco cultivated [from three growing regions] in Nicaragua. Mixing the sweetness of Jalapa, the aromas of Condega and the strength of Estelí.

In 2013, my father established his third company, Omar Ortez, which is dedicated to the production of raw materials to supply our own tobacco. This process includes fermentation, stripping and sorting leaf.

Q: So the family business is vertically integrated?
A: As of this year, the Ortez family has integrated the whole tobacco process—from the seeds for filler and wrapper to the hand-rolled cigars. And from the fields through the fermentation room, and into the production rooms, the expectation of a well-aged, well-fermented, well-balanced, and aromatic cigar always has remained the philosophy of the family.

Q: What cigar brands does Agrotabacos make? Does it roll only your family’s cigars or does it make third-party brands as well?
A: About 40 percent of our production represents our family brands—Omar Ortez Originals and Omar Ortez Maduro. The other 60 percent are third-party brands. We’ve worked with companies like , Zander-Greg, Flor de Gonzalez and Kretek International.

Q: Do you have a favorite?
A: The most exciting for me was our latest collaboration with Ventura Cigar Co. creating the Fathers, Friends, and Fire blend.

Q: Was that the first cigar brand you created?
A: Fathers, Friends, and Fire represents my entrance to the world of tobacco brands. I am honored to have my own name and seal. But further than this, I’m confident that this is an homage to my father’s time invested, and my own new steps and accomplishments in the art of tobacco blending. This honors me even more.

Q: How did you like the creative process?
A: The process of blending this cigar was quite an emotional challenge. It was where my endless conversations with my father and Fausto came in handy, remembering their guidelines on which tobacco leaves don’t get along.

Q: What’s the meaning behind the name Fathers, Friends, and Fire?
A: Father and daughter, friends and fire. This is how my first blend can be summarized. One that combines the dreams of a 24-year-old girl and the tradition of her family’s tobacco legacy.

Q: How did you start working with Ventura Cigar Co.?
A: I had been working more than six months at Agrotabacos, supervising quality control. I was a quality reviewer for the rolling of the cigars, and I had three levels of supervisors above me. During my work schedule, my uncle gave me the chance to take about 30 minutes in the morning to post my Instagram stories and make some videos from his office window. Afterwards I would join him at work.

Q: So somebody noticed your work on social media?
A: One day I received a message from Benjamin Winokur, marketing manager at Ventura Cigar Co. They wanted my dad and me to collaborate on a special project. I honestly never imagined their idea was for us to produce a blend. I was convinced it was a request for marketing purposes as they had followed me on my social media. On the day of my birthday [in 2017] I had a meeting with Benjamin, who explained their vision of us producing a cigar containing both the tastes of father and daughter.

Q: When did you meet Michael Giannini?
A: A few weeks later, Michael Giannini  along with Patrick Hurd, vice president of sales for Kretek International, visited us and came to formalize the business. They were talking with my father and reconstructing how they had been following me through the social networks, and were inspired by our story. For the first time somebody spoke about my work and my impact through Instagram, even though it wasn’t even my “official” job.

Q: Are you working on any new projects?
A: I have lots of ideas. The team at Ventura is so great about letting me express my creativity and energy through blending, and they are so supportive of my growth. Come T.A.A. [Tobacconists’ Association of America, March 17 to 21], we’ll have something special to announce, which I think everyone will love.

Q: What is your current title at Agrotabacos?
A: I´m the quality control manager and the chief marketing officer of Agrotabacos. This year, I have new responsibilities. I´m now also in charge of the stripping process, where the tobacco is sorted and selected based on the type of leaf, color, and quality. This allows me to spend half of the day by my father’s side, inspecting and approving, and of course, always learning from him. And I get to smoke puritos of each bale that we’re using in our blends.

Q: Will you still be blending cigars?
A: I am still working with the blending team, but I am especially focused on the stripping process and on marketing, working with Ventura Cigar Co. and developing my brands in the social media space.

14 Small Cigars To Smoke When You’re Short on Time

How the sun and foods contribute to our Vitamin D

0
Stanley Gordon 5 February 2019
No Comments Yet